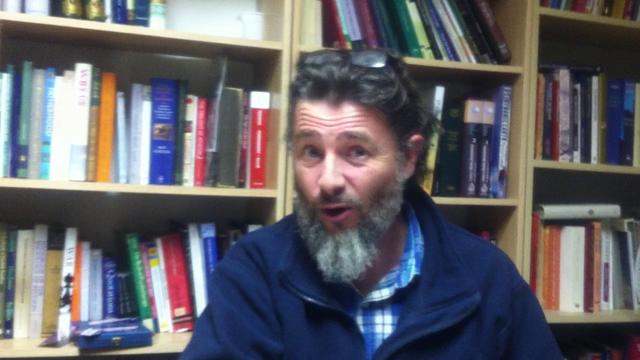 Guest writer Sara Ahmed pens down the quest of Yusuf Chambers, as heard from him at the WOC 2014 event:’Story Night with the Stars’.

The long-winding tale of Yusuf (previously known as Timothy) Chambers began, when at 4 years of age, he yelled at his Irish father, “You need to go away because my mother does not like you anymore!”

With such family issues, it is hardly surprising that Tim grew up as a disturbed child – Catholic just by name, least interested in school, never having read a library book. At 15, he ran away from his home.

Why are we here?

During his new vagabond life, he changed seventeen addresses in the quest to find out the purpose of his yet aimless life, freaking people out with his profound and incessant questions.

He claims to have flipped through every -ism and -schism ever founded- the first being ‘social activism’ with its manifestos of ‘love for humanity’. It had not been long since he joined that a member remarked, “Someday we will have to pick up guns”.

Tim was ‘vegetarian’, he couldn’t stand the thought of blood so he deserted the group.

He then came across Buddhism and started meditating under the guidance of a monk. He enjoyed the practice, but was not totally satisfied. After a while, he finally asked the monk, “Why are we doing this?”

He was expecting that this guy here, who had given up everything one would hold dear in life in order to ‘meditate’, would have some epic answers to the mystery of life.

The monk declared with mighty flourish: “to contemplate and be supreme”. Awesome, thought Tim, this answers so much.

Seeing that he wasn’t convinced, the monk gave him a book about Buddhism to read. Tim could not get past the first chapter of the incomprehensible conversation between Buddha and his disciple! The purpose of life could surely not be this hard to understand!

Since he didn’t know what else to do, he continued meditation, all the while shut up in a room under a pile of astronomy books. The sky fascinated him a lot; every night he would look at the stars and would cry: “Why don’t I know? Why don’t I know?”

By now it had been 11 years on this quest of life and still he didn’t know what he was living for…!!! He merely had an ‘existence’, but he didn’t have a ‘life’. He even started to think of ending his purposeless existence.

Before he took his suicidal thoughts too seriously, he thought he would give one more chance to the obvious way: Christianity. He went up straight to the priest in church and asked him, “What’s the purpose of life?”

The priest replied, “I don’t have time to answer you right now. Come back on Monday.”

When he did, the priest thoughtfully said, “Have you ever thought of getting a theology degree?”

The priest promptly replied, “In that case, I can’t help you!”

After storming out of the church, he came back to the Buddhist way of life by becoming an extreme vegetarian. With severe stomach problems starting to bother him, he could not continue for long. Eventually, he gave up veganism too.

He then thought, “I’ll hitchhike to Ireland to meet my father, maybe he has an answer!”

On reaching the fields of Ireland, he was ushered to a ragged old man with a dirty face in a wooden cart who refused to accept him as his son.

Alhumdulillah (praise be to Allah), it was a misunderstanding. It wasn’t his actual father.

Even Tim would have known more about the purpose of life than that old fellow!

Fortunately, he found his uncle who he told him his father was in UK, living the life of a drunkard. The trip to Ireland, thus, turned out to be futile and all hopes that his father would know the answers went down the drain. But at least, he was able to check off one more item on his search-list.

Around that time, however, he met a girl whom he became very intimate with. Then one fine day, she said, “Don’t come to my house tomorrow!”

He asked why and she said, “You won’t understand, it’s something to do with my religion..”

He was so devastated, he snapped back, “Either you are wrong or your religion is wrong!”

He loved that girl! He just couldn’t leave her, so he knocked on door of the Islamic Society hoping to find out what was up with her religion that was making her resist meeting him.

When he told the long bearded group leader what was wrong, he bluntly stated, “This girl is not right for you. Go away!”

He waved him off with a pile of books and told him to read. Tim read all of them. They had all those answers that he had been looking for!

He went back to the girl’s house and said, “Assalam Alaikum!! Why didn’t you just tell me the truth? I would have understood!”

By the end of Ramadan, in his own words, “I finally had something tangible I could feel and touch! There is no way to explain the mercy of Allah!”

He started fasting and went to the masjid where a person asked him, “What are you doing here? You have to take the Shahadah (testimony of faith) in order to pray!”

He took his Shahadah and 300 people hugged him. Never in his lifetime had he been hugged by men before!

Yusuf Chambers ended his story by reminding us that a lot of people in Pakistan are contemplating, wondering, doubting the purpose of life because they have nothing to bring them to Quran! For him, being a non-Muslim and not knowing the truth was like being gagged and locked up in a dark room where some rays of light flicker and then go off. It was MISERABLE!

He urged us to love for people what we love for ourselves. We have to take the responsibility to create a renewal because we have that love and the capacity to bring change to the entire world.

3 thoughts on “From Timothy to Yusuf”